You are here: Welcome to London > Set up in London > Sectors > Why London for creative? > Games
London gives games companies access to talent, a vibrant ecosystem with companies of all sizes, and financial support through the Video Games Tax Relief, R&D and access to VCs.
Watch video on YouTube

Find out why London provides such a great opportunity for games companies.

Some of the world’s biggest global successes – Football Manager, Monument Valley, Candy Crush Saga, the Batman Arkham series – have all been created in London. Those famous games are matched with a network of expert games studios and publishers, such as Activision Blizzard, SEGA, Sony Interactive Entertainment, King, Bossa Studios, Riot Games and Improbable.

With 614 games developers and publishers based in London – and almost half of them in the centre – there’s a dense population of engineering and design talent. London has more than 357,000 developers, the highest population in Europe. [1]

London is an incredible centre of innovation, which lends itself to the creation of new gaming genres, that's unmatched elsewhere in the world.
Roberta Lucca, Co-founder and Chief Brand Officer
Bossa Studios

From sector specific expertise to information on discounted desk hire, our team can help you take advantageous of London's opportunities from day one.

Let London invest in your games. Between 2015 and 2019, 105 VC deals – worth £596m – were completed in London’s games and esports sectors in London.[2] London is also home to two games-specific venture capitalists, Hiro Capital and London Venture Partners.

Prosper in an industry expected to grow by 6% (to £5.2bn) by 2021. More companies are recognising esports consumers as an opportunity, as seen with the opening of London esport hubs such as Wanyoo, Razer and GAME’s Belong. See where London's games companies are based. 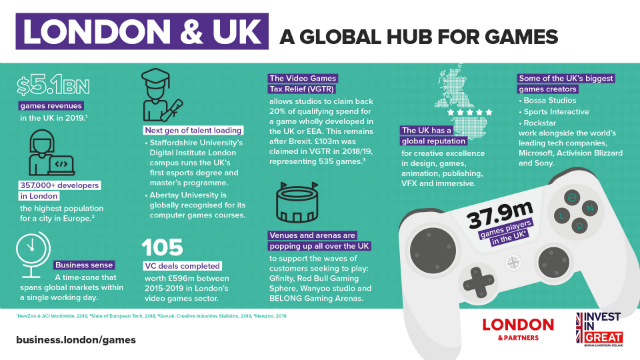